Christmas Traditions Around the World

Every family has their own traditions: celebrating and feasting on Christmas Eve, walking down the hallway on Christmas morning to see what Santa has left or even visiting the amazing light displays of Busch Gardens Christmas Town.


Video: Our kid panel shares their favorite traditions and what they love most about Christmas


Given our European theme, we wanted to learn how other countries share in the holiday spirit. We found some of the more interesting ways that others spread Christmas cheer; most have inspired our own traditions here in America!

Grab a cup of hot cocoa and snuggle up with loved ones as you take a tour of Christmas traditions on the other side of the Atlantic Ocean. After all, if Santa can do it in one night, so can you.


Christmas Lights - A celebrity is asked to “turn on” the lights in most villages or cities in the UK. Oxford Street has the most well-known light display in London.

England’s Milk and Cookies - Instead of milk and cookies, kids set out mince pies and brandy as a special snack for Father Christmas while delivering toys and presents. Custom has changed slightly to a non-alcoholic beverage, as it is best that he doesn’t drink and drive his sleigh.


Christmas Celebration - Up until 1958, celebrating Christmas in Scotland was not allowed for almost 400 years. Due to the ban, the celebration remains a small gathering, as the Presbyterian Church still does not encourage it.

Burning the Differences - To clear the air and mend any hostile relationships between friends or family, a rowan tree is burned on Christmas Eve. The fire must continue to burn into the morning or the family will have bad luck for the next year.

Village Christmas Trees - A large tree is decorated in the town center. Each day leading up to Christmas, one of the bulbs is smashed until only a few remain near the top of the tree on Christmas Eve. This countdown has been carried into households in the form of an advent calendar.


Candles in the Window - A candle burns throughout the night in the largest window of many homes to offer a guiding light for Mary and Joseph.

Women’s Christmas - Historically, on January 6 (also known as the Feast of Epiphany), many towns gave the women the day off while the men did household chores. Although this tradition has died out, many Irish women still get together, gossip, drink tea and celebrate life on the Sunday nearest to Epiphany.


Nativity Scenes - Unlike what you typically see in America, these scenes include everyday people and occupations. Some examples are a police officer or a doctor, not just traditional biblical figures.

The Yule Log - Instead of the digital Yule Log you might be familiar with, cherry wood is carried into homes, sprinkled with red wine and burned on Christmas Eve. Some even leave the Yule Log burning throughout the night to light the way for Mary and baby Jesus.

Shoes with Small Toys - Children place their shoes on a hearth in hopes that Père Noël will fill them with small toys. Over time, this became what we all know as hanging stockings on the mantle.


Mummering - In smaller towns and villages, people dress up in costumes and ask their neighbors if they are taking mummers. Just like carolers, they sing, dance and celebrate before moving on to the next house. The best part is that each house has to guess who the mummers are. If they get it wrong, they have to join in the fun and go from house to house. This is commonly celebrated during the 12 days of Christmas, from December 26 – January 6, and is popular among adults.

Christmas Light-Up Contest - Labrador City is known for snow, and lots of it. They use this to their advantage and create ice sculptures in their front yards. Each house is covered in lights and a contest is held to choose the winner with the best light display. We think our 10 million lights would win this competition any year.

Réveillon - After midnight Mass on Christmas Eve, a large celebration is held, lasting until the early morning hours. People enjoy a feast with pigs feet stew and meat pies. Père Noel visits during Mass in order for the celebration to last into Christmas Day.

Santa’s Home - Because the North Pole is so close to Canada, many children say Santa Claus is Canadian.


Advent - Several types of Advent celebrations have come from German traditions, including calendars with small trinkets or candies and the wreath with four candles used in churches. Another form of celebration involves making a wreath with fir branches and adding 24 decorated boxes with little presents inside.

Christmas Markets - Located throughout Germany, these popular markets sell food and decorations such as glass ornaments and glühwein (very similar to our own Mistletoe Marketplace at Christmas Town). Despite popular belief, the glass ornament Christmas Pickle is not an actual tradition from Germany and most Germans have never heard of it.

Christmas Trees - A very important piece of German tradition. These are brought into the house on Christmas Eve and mothers of younger children secretly decorate the tree before they exchange gifts that evening.


Nativity Scenes - Similar to French traditions, the nativity scene is a popular tradition that originated in Naples, Italy. The Italians also incorporate everyday people and objects instead of just traditional biblical figures. These are displayed in the shape of a pyramid, decorated with colorful paper and candles. On Christmas Eve, baby Jesus is added to the crib. The largest nativity is in Naples and has over 600 objects.

Christmas Meal - Most families prepare a seafood meal on Christmas Eve to celebrate the festive season. It is typical that meat (and sometimes dairy) is not part of the dinner. An Italian Christmas cake (referred to as Panettone) is served for dessert with a cup of hot cocoa.

Epiphany - More presents are given on Epiphany night than on Christmas Eve. Befana brings presents to the kids and fills their stockings instead of Babbo Natale (better known to us as Santa Claus).

What's your favorite family tradition to celebrate the holidays? Share your story with us on social media using #ShareMyBGWStory @BuschGardensVA 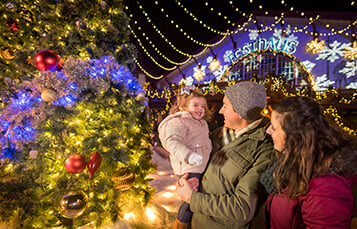 Need inspiration for your Christmas tree this year? Try one of these simple themes. 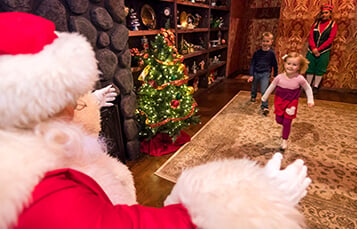 Where to See Santa Claus at Christmas Town

Learn where you can find Santa this holiday season at Busch Gardens Williamsburg.

Christmas Town
Kids and Families
Insider Tips
Are you sure you want to delete this item?