Learn About Our Hyenas

Venture into Edge of Africa® to see this clan of spotted hyenas.

Hyenas are highly skilled and successful predators. Although hyenas are often thought of as scavengers, they are actually aggressive hunters whose population in the wild is declining. Busch Gardens® Tampa Bay is committed to protecting the future population of hyenas, and as a result, the cackle has welcomed two babies as a part of the Species Survival Program.


Hyenas are opportunistic hunters and are very social, hunting in groups. However, in order to catch larger prey, hyenas will hunt together in clans. A hyena’s diet is carnivorous; they prey on wildebeest, zebra, and buffalo, to name a few.

Ask an Educator about Hyenas

What is the average life span of a hyena?

The average life span of a hyena is 12 years; however, some can live for a maximum of 20-25 years.

In what part of the world will you find wild hyenas?

Wild hyenas are found South of Sahara, except through areas with extreme desert conditions.

One of the vocalizations that hyenas make sounds a lot like laughter, but it does not indicate the same emotion as it does for humans.  For hyenas, it can be a sign of excitement or anxiety, often heard if the clan is having a hierarchy dispute or if they have successfully hunted its prey.

Are hyenas part of the dog or cat species?

Although they resemble dogs, spotted hyenas are neither canine nor feline.  They belong to the family Hyaenidae, along with three other species: the brown hyena, striped hyena, and the aardwolf.

See Africa's largest carnivores up-close in the Edge of Africa®. 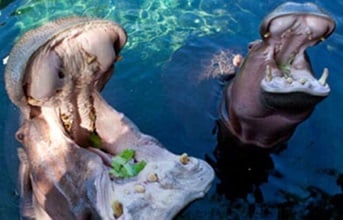 Watch these misunderstood animals as they swim, eat and lounge. 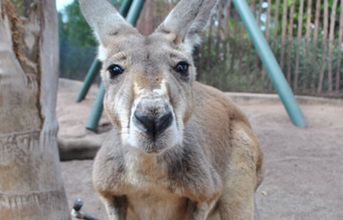