It’s Mother’s Day at Busch Gardens, so we’re catching up with some fan-favorite mom-and-baby pairs around the park. Warning: this post contains adorable animal pictures that may cause outbursts of “Aww!”

Since last Mother’s Day, the giraffe herd has three new babies to celebrate this year.  Last fall, Celina the reticulated giraffe welcomed baby Quinn just before Thanksgiving, weighing in at 150 pounds. At six months old, Quinn is now over 525 pounds and his favorite treat is mulberries.

Soon after Quinn, Cupid had her own 150-pound bundle of joy. Baby Angel was born just one day after Christmas. Today, she weighs around 500 pounds and is often found playing with Quinn. Angel is the more bold and curious of the two calves.

Next time you’re in the park, you can spot these two calves and their mothers out on the Serengeti Plain. You can get even closer to the cuteness on a Serengeti Safari!

Who could forget baby Patty? Born just a couple months ago on the eve of St. Patrick’s Day, Patty is the youngest and the smallest of the giraffe calves, with a birth weight of only 105 lbs. 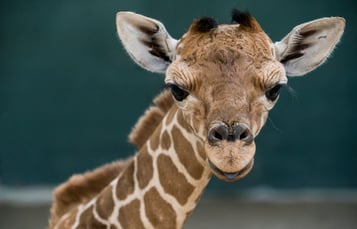 In just two months, Patty has grown significantly and now weighs in at 400 pounds! Patty and her mother Bititi are spending quality time together and bonding under the watchful eye of the zoo team. Guests can expect to see them on the Serengeti Plain soon.

Over at the Myombe Reserve, you’ve probably seen Enzi and Oliver, the two youngest gorillas in the troupe, following their mothers Pele and Mary very closely. At birth, both infants weighed in around 3 pounds. 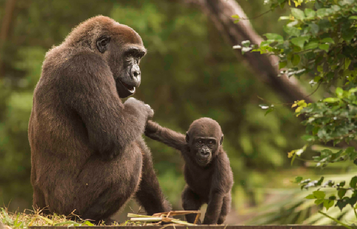 Son of Pele, Enzi is three years old, weighs 60 pounds, and very independent. He seems to enjoy exploring plastic buckets by wearing them on his head. You can often spot him tumbling with around with Oliver.

At almost two years old and weighing in at 30 pounds, Oliver is a little more dependent on his mother Mary still. He loves to ride around the habitat on her back. 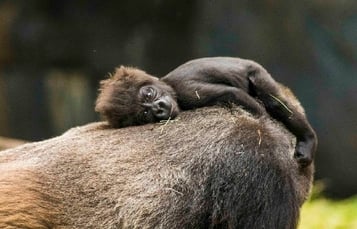 Celebrating her first Mother’s Day is Luna the Bornean Orangutan, who welcomed little Malu last November. At six months old, Malu has grown from his birth weight of 3 pounds to 8 pounds. He is continuing to nurse, but has starting tasting solid foods as well. 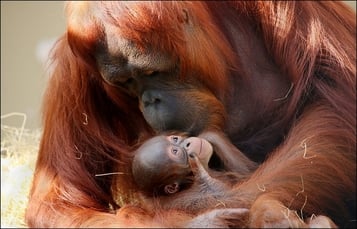 One of the most famous babies at the park is Winnie the Rhino, born last October. From her birth weight of 140 pounds, Winnie is now tipping the scale at 875 pounds. You can see her on the Serengeti Plain with her mother Kisiri and older sister Nyota. 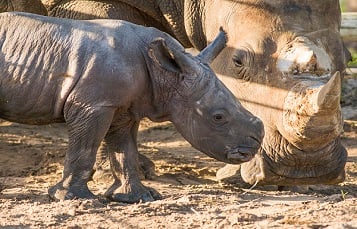 These animals are more than adorable - they bring awareness to the problems their wild counterparts face. The reticulated giraffe species has recently been listed as vulnerable, with their numbers in the wild declining by 80% over the past three decades. White rhinos like Winnie are still being poached for their horns. Both Oliver and Enzi are Western Lowland Gorillas, which are critically endangered in the wild, just like Bornean Orangutans like Malu.

Through the Conservation Connections speaker series at Busch Gardens, you can learn about the latest conservation programs from experts as they share their incredible stories of working around the world on species conservation and environmental issues. Speakers will be announced throughout the year, be sure to check the website for the next session.

If your ‘little animal’ is hungry for more wild adventures, there are still spots available for Summer Camp this year. From kindergarten to college, there’s something for everyone! 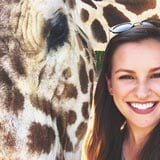 Taylor is a self-proclaimed Tampa connoisseur who firmly believes you're never too busy to go ride a coaster. She enjoys meeting new animals and obsessively watching puppy videos! 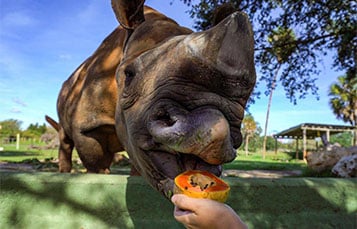 Learn more about how a papaya seedling grew from composted rhinoceros poop. 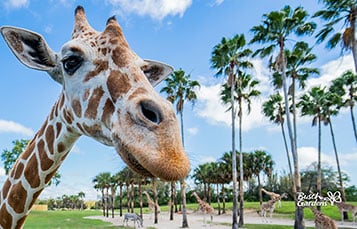 Need to add some “thrill” to your conference calls? Look no further. 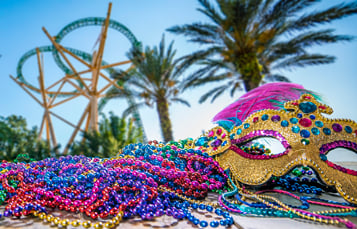 Searching for something fun to do this weekend? Look no further than Busch Gardens to catch some beads and savor in New Orleans dishes at our NEW Mardi Gras Weekend!