Learn about the various flocks of birds that call the park home.

You can find these beautiful birds flocking together in the Bird Gardens, Egypt, and Nairobi. Busch Gardens® Tampa Bay is home to Lesser, Chilean and Caribbean flamingos.

Insider tip: For the closest face-to-beak encounter, visit the flock at Animal Connections in Nairobi. 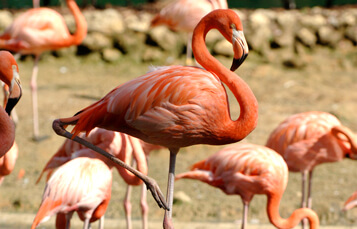 Lorikeets are a small to medium-sized member of the parrot family. In the wild they are quite widespread from Australia and surrounding islands to some remote islands in the South Pacific. Lorikeets are noisy, brightly colored birds which can frequently be found in large flocks.


Stop by Lory Landing to visit our interactive aviary, learn about lorikeets and even get the chance to feed them! 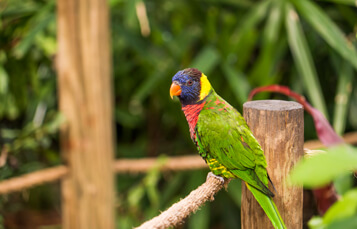 The world's largest bird roams the African Savanna and desert lands but does not have the ability to fly. Instead, ostriches are strong runners that can sprint up to 43 miles an hour and run over distance at 31 miles an hour. Their legs are so strong that an ostrich kick can kill a potential predator, like a lion. Ostriches live in small herds and eat a variety of plants, roots, and seeds. Fun fact: contrary to popular belief, ostriches do not bury their heads in the sand! Instead, they will lie low and press their necks to the ground in an attempt to become less visible to predators. 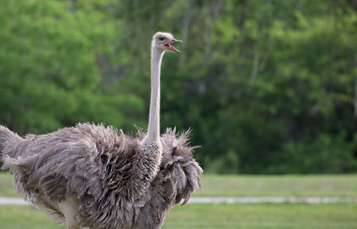 The iconic toucan can be found in Central and South America throughout the rainforest canopies. They eat a variety of fruit, insects, other birds' eggs, tree frogs, lizards, and fish. They can grow to be anywhere from 12 to 24 inches tall, depending on the species, but no matter the size all toucans are vital for rainforest health and diversity. Toucans pass seeds from the fruit they eat through their digestive systems, which helps replant the plants. Although they are not considered an endangered species, toucans are considered very popular pets, and many are captured to supply a demand for this trade.


Get up-close to a toucan at Animal Connections in Nairobi. 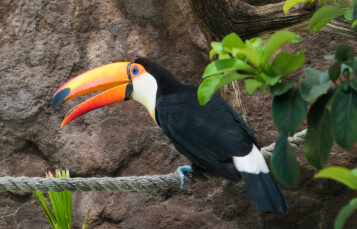 Also known as the laughing kookaburra, these birds are the largest member of the kingfisher family and were once called the giant kingfishers. They can be found in forests, woodlands, and parks and gardens in cities throughout Australia, Tasmania and New Zealand. A kookaburra's diet consists of snakes, frogs, and rodents. Their deafening, and notorious, call starts with a trilling sound and then becomes a shrieking "laugh" before ending with a soft chuckle.


Visit Kookaburra’s Nest in Bird Gardens and be immersed in an aviary full of a variety of Australian and Asian bird species. 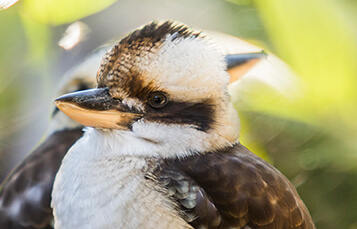 Ask an Educator about Flamingos and Peacocks

How tall are flamingos?

Where do flamingos live?

Caribbean flamingos are found in the Caribbean, the northern coast of South America and Galápagos Islands. They make their homes in tropical and subtropical saltwater lakes and lagoons. Lesser flamingos live in eastern, southwestern and western Africa and India and Pakistan.

Caribbean flamingos are not currently endangered, though populations are suffering due to habitat and breeding site loss. Lesser flamingos are more severely impacted by these threats, as they breed in only three locations in all of South Africa.

Why are flamingos pink?

Flamingos eat a diet of algae, insect larvae and small crustaceans, such as shrimp and mollusks.  This diet contains a nutritious organic chemical called beta carotene.  The flamingo’s digestive system extracts the pigment from the carotenoid-containing food and it eventually dissolves in fats.  The fats are then deposited into new feathers as they grow, and this turns the flamingo’s feathers pink.

What does a peacock’s diet consist of?

How long is the incubation period for a peacock?

A peacock’s incubation period is 28 days and the clutch size ranges from 3-12 eggs.

What has given peacocks an excellent chance of survival?

During the Roman times and the Middle Ages, peacocks were considered a status symbol because of their striking appearance. This paved the way for a long and close association with humans giving them an excellent chance of survival. 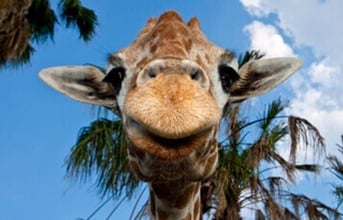 Come face-to-face with nature’s tallest animals on the Serengeti Plain®. 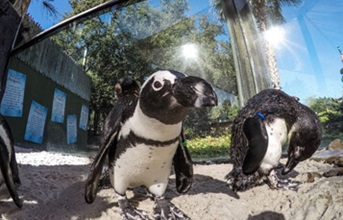 Come face-to-face with the African penguin colony at Penguin Point. 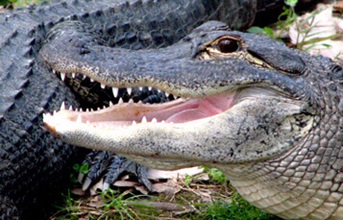