The Passing Zone is one of the most successful and sought-after comedy acts working today.

Owen Morse and Jon Wee met in 1986 at a juggling convention and instantly knew they were destined to be a team. But they decided to graduate from college first. Which they both did. Rather than pursue careers in Economics and Psychology, they lit some torches, and started throwing stuff into the air. And things clicked. Two weeks after their first performance together they won the Silver Medal at the International Jugglers’ Association Teams Competition. The next year they won the Gold. That recognition earned an invitation to appear at the renowned Comedy and Magic Club in Los Angeles, where on their first night they were approached by the “Tonight Show” talent scout and booked for their first national television appearance in September 1990. Johnny Carson enjoyed them so much they were asked back less than a year later. Their first feature film followed, The Addams Family Movie, where Jon and Owen doubled for Gomez (Raul Julia) and Uncle Fester (Christopher Lloyd) in the climactic Mamushka dagger-passing scene. They also appeared in the award-winning comedy documentary, The Aristocrats.

The Passing Zone’s first London appearance was in the Royal Variety Performance at the Dominion Theatre, performing for Prince Charles and sharing the bill with Tony Bennett and Riverdance. They expanded their US national television audience by passing clubs over the heads of the Miss America Pageant contestants during the swimsuit competition, demonstrating almost inhuman concentration skills! They were finalists on NBC’s “America’s Got Talent” performing in Seasons 1 and 11, and both times losing to a young, female singer!

Jon and Owen are known as much for their comedy as their juggling skills. They were featured twice on the gala stage at the Just for Laughs Comedy Festival in Montreal and have opened for comedians Jay Leno, George Carlin, Bob Newhart, Bob Hope, and Penn & Teller. Television appearances have included “Comic Strip Live,” “CNN’s Road Warriors,” “Hell’s Kitchen,” “An Evening at The Improv,” “MADtv,” Penn & Teller’s “Sin City Spectacular,” “Steve Harvey’s Big Time,” and regular returns to NBC’s “Today.” And they were commentators on ESPN for their coverage of the World Juggling Federation competitions, and the Moxie Games at SkillCon.

Several years ago they were guest performers at The White House.

The Passing Zone has been awarded five Guinness World Records and 18 Gold Medals from the International Juggler’s Association. They were presented with that organization’s Award of Excellence, for “excellence in the art of juggling through professional performance,” which is the most prestigious award in juggling (essentially the Juggling Hall of Fame). In addition, they have been inducted into the National Speaker’s Association’s Speaker Hall of Fame.

They can often be seen doing entertainment and keynote speaking at corporate events, for which they are a natural fit. Their act is clean, so it offends no one. They appeal to all ages, and all walks of life, so whether their audience is a group of mechanical contractors, software engineers, hairdressers, or billionaire business leaders, they are always a hit. Not only do they entertain, but they customize their performances by juggling a company’s product, incorporating their slogans, and inspiring groups to perform as a team, with excellence and creativity.

In addition, The Passing Zone has become popular at theaters and performing arts centers, bringing their zany and sometimes terrifying acts to communities all across the nation. Their most recent show, “The Passing Zone Saves the World!” is currently touring.

Jon and Owen reside in the greater Los Angeles area, where, when they are not throwing things, they spend as much time as possible with their families, and still manage to squeeze in hang gliding, surfing, mountain biking, and motorcycling, although not all at the same time.

The summer of epic live music is here at Busch Gardens. Top artists from a diverse collection of genres and decades will take the stage LIVE from the outdoor Royal Palace Theatre every Saturday at 7:00 p.m.

Daily, June 17 through August 14
An ALL-NEW Summer Celebration turns up the fun at Busch Gardens Williamsburg. 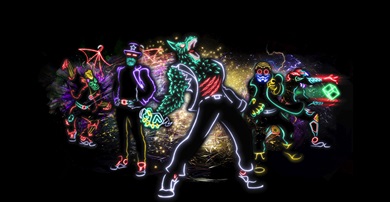 America's Got Talent Stars take the stage this summer with new daily performances every week!