It's an Orangutan Birthday! 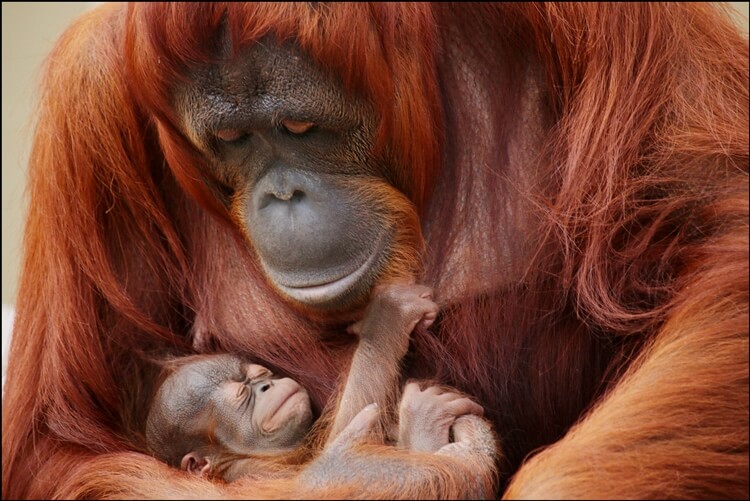 I can’t believe I am writing about this already. It has been one incredible year for team Jungala! We have had the privilege of enjoying a front row seat as Malu experienced his first year of life. Orangutans are critically endangered, and only a handful are born in zoos every year. Orangutans have one of the longest birthing intervals in the animal kingdom: only one baby every 7-10 years. We are all-too-aware of how lucky we are to be a part of Malu’s journey, and I am excited to share with you what our favorite little redhead has been up to in his first year. 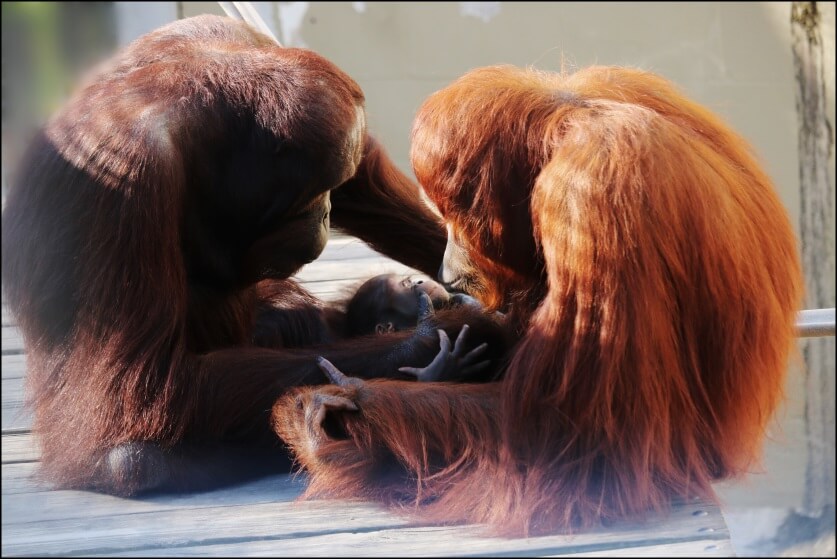 Malu was born on October 14, 2017, to his mother, Luna, and father, Madju. Luna and Madju are both first-time parents, and the responsibility for Malu’s care rests squarely on Luna’s shoulders. Luna herself wasn’t raised by her mother, so we were a little concerned about how she’d be as a mom. She took to motherhood perfectly, and impresses us every day! For about the first month, Malu mostly hung on Luna, nursed, and slept. After about a month, we began to notice some little changes in him, and began keeping a diary of his progress.

1 month: We noticed him focusing on us more when we talked to him or to Luna.

2 months: He let Luna lay him beside her rather than having to be on her at all times. He began to hang onto different places on her body rather than just her chest.

3 months: He began to reach out to us with his hands. This was amazing for us! We have strong relationships with all of our orangutans, and beginning to build a relationship with Malu was incredible!

He also began to hang onto the mesh inside of the house with his hands and feet without being supported by Luna.

4 months: He began teething and a few “chicklets” popped up. He also began to chew on pieces of Luna’s food.

5 months: Luna began putting Malu in places and she was able to move off a few feet to do her own thing. Imagine a baby hanging onto you 24/7 for 5 MONTHS!! She seemed really relieved to have a little “mom” time, and even began to stick him on the protective mesh by us so we could “babysit” while she took a nap.

6 months: Luna continued to be able to walk further and further away from Malu without him crying. Yes-they cry just like any other baby!

8 months: Malu’s molars started to come in, and he began to experiment with climbing the vines on the habitat.

9 months: We began training Malu. What do you teach a baby? We started with the basics: teaching him how to eat from a spoon, to come over to us for treats, and how to recognize his name.

It was also around 9-10 months that we as keepers began to have some suspicions about what exactly was occurring in the tall towers of the orangutan habitat. While most fully-grown male orangutans ignore their offspring (or, in their natural habitat, never see them at all,) Madju had been very interested in his son from the beginning. Inside of the orangutan house, we noticed that Malu would seek out Madju specifically, and he was very playful with him. A few of us had suspected that, on the habitat, Madju may have been taking and holding Malu while the 3 of them hung out in the towers. 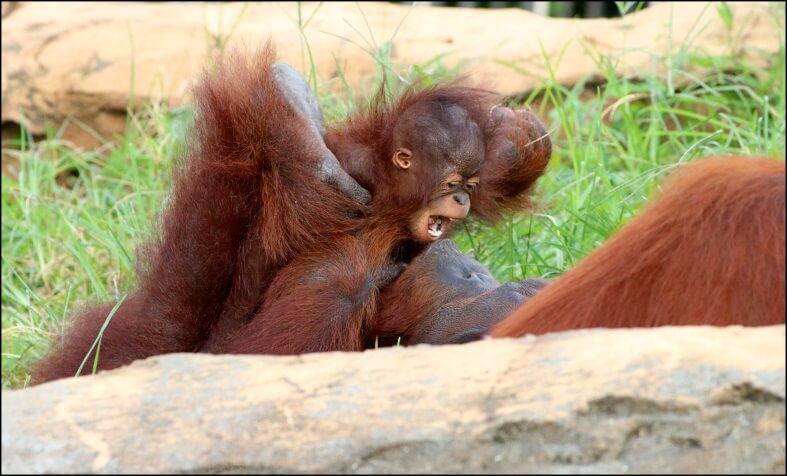 This is relatively unusual behavior. Most mother orangutans wouldn’t be open to letting a father hold their infant. It was difficult to determine exactly what we were seeing because the towers on the orangutan habitat are so high. One day, I happened to be on the roof and was watching Malu run in the grass on the spire on the habitat while Luna munched on grass. Madju, who had been foraging on one of the lower levels, proceeded up the vine to the spire. He walked right over to his tiny son, picked him up and tucked him to his chest, then promptly did a somersault! What ensued was the most adorable father-son playtime ever. Malu had so much fun wrestling with his dad. He chased after Madju when he walked away, chewed on his face and fingers, and held onto his legs while he walked. Our suspicions were confirmed that Madju was indeed a very active part of his son’s life. Because Madju is a younger male, we had always joked that when Malu was old enough, Luna would finally get a break!

As thrilled as we are by Malu’s progress, we are just as proud of how Luna and Madju have developed as parents. We couldn’t ask for a more perfect little family unit! This has been one amazing year, and we are excited to celebrate Malu’s birthday. Please join us Sunday, Oct. 14 at 1pm in the Orangutan Outpost in the Jungala area at Busch Gardens Tampa Bay, to help us celebrate Malu’s 1st birthday! 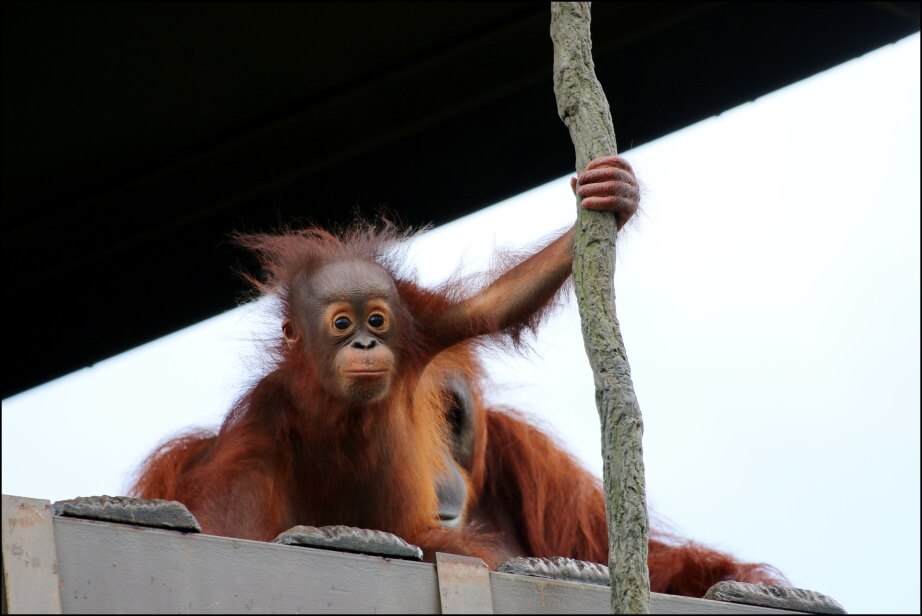 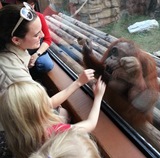 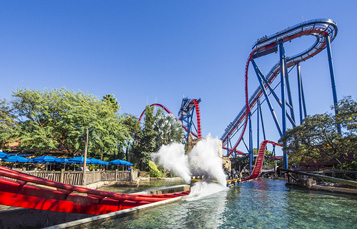 When it comes to your summer thrills, you gotta stay cool and recharged. Follow these pro-tips during your next Busch Gardens visit, and you’ll be sure to beat that summer heat all season long! 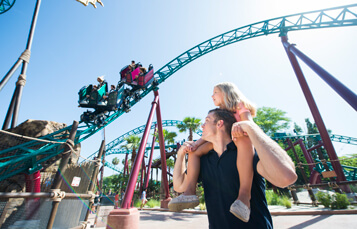 4 Thrills That Every Dad Will Love for Father's Day

When in doubt, give the gift of thrills! Make this Father’s Day one to remember and celebrate with animals, coasters, fireworks, and MORE! 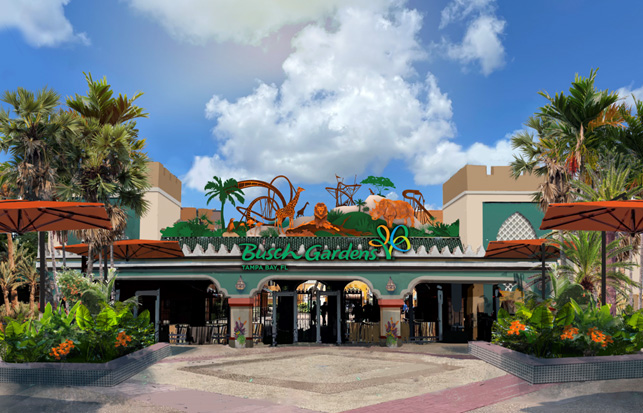 Being a Pass Member Just Got Even Better

If you’re a Pass Member here at Busch Gardens and/or Adventure Island, you’re in for a treat! Our parks have had a lot of new and exciting changes happen recently and as a thank you for being part of our Pass Member Family, we are thrilled to share with you a sneak peek at one of the largest investments we have ever made in the park experiences.